Nergigante brings the heat with this extremely offense oriented Faith deck. Sacrifice your own Health to play powerful units for a lower cost while powering up the Spike Launch hero art at the same time! This deck is strong at all points in the game! Strong units to start the game which power up your other units as they die due to the Faith mechanic. The deck also has just enough destruction to frustrate any opponent. No matter what your opponent throws at you then you can handle it.

Ooze and Blade are the most effective first plays because they have the highest value. Ideally you can follow up with a Dark Mantis or Satsuki to pressure another lane when the opponent responds to your first play.

While the deck has some life gain there is A LOT of Health sacrificing going on. In classic aggro fashion this make its hard to maintain a long game. Eventually you won't be able to play units without causing your own defeat. This can also be very dangerous in Aggro Mirrors because they can hit you hard enough that you can't recover even if you stave off the opponent's threats.

Power: 5 Difficulty: 4 Style:  Tempo Overview:  Fours is a powerful tempo deck which utilizes the new invasion mechanic to keep opponents units off the field. The key to winning with this deck is to continually keep the opponent on the back foot with on place effects and whittle them

Power: 5 Difficulty: 3 Style: Aggro Overview: One of the strongest Aggro decks in the meta right now. Metsu Spirits combines extremely high on play damage effects with heavy hitters like Barawassha and Hinoa. The goal of this deck is to constantly keep the opponent on the back foot by 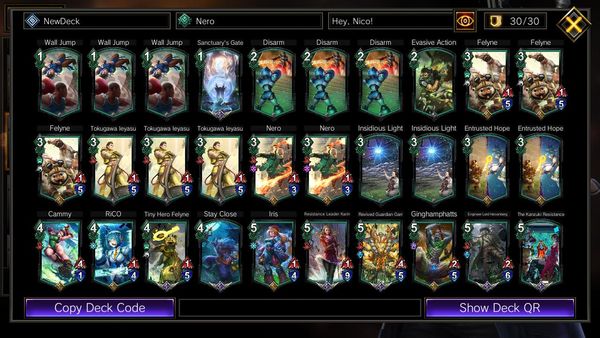 Power: 4 Difficulty: 4 Style: Midrange Overview: The Hey Nico! Nero deck is the poster child of stability. This deck is able to play well in all situations relying more on playing better than your opponent over the course of the game. It has a higher difficulty rating due to